I'm super excited to be taking part in the Final Life blog tour. Today author Rose Garcia is sharing six words that play a major part in her novel Final Life. Plus there's even a giveaway at the end!

Eight lives. You’d think Dominique would get it right, but she’s failed every time. Now on her final life, Dominique must discover the secrets of her past before confronting the Transhuman hunter who wants to kill her for the last time. Farrell, a mysterious Transhuman protector, and Trent, a hot guy from her school, want to help her. But it’s up to her to get it right this time—or she’ll be dead. For real.

1.      Transhuman is defined in the 1966 Reader’s Digest Great Encyclopedia as “surpassing; transcending; beyond.” In the 1983 Webster’s New Universal Unabridged Dictionary, transhuman is defined as “superhuman.” The main characters in Final Life are Transhumans—humans that are able to control the energy in and around them. This ability gives them superpowers, and allows them to do things ordinary people are unable to do.

2.      Numerology is the study of numbers, more particularly one’s birth date, and the supposed influence the numbers have on a person’s life. I once had a neighbor use numerology to determine my soul life. According to my neighbor and her interpretation of numerology, every person has one soul but nine lives. (Like a cat, but not a cat!) In Final Life, a neighbor does the same reading for Dominique and tells her that she is living her final life, life number nine. And, as it turns out, this is true. She is indeed living her final life and has only one last chance to find her killer before she ends up dead… again. 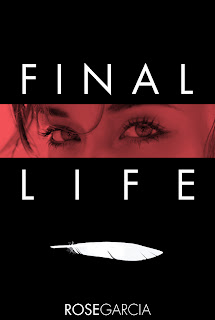 3.      Amnesia is the partial or total loss of memory. In Final Life, Dominique has no memory of her past lives. All she has are sparks of recognition from time to time, but she isn’t sure if she can trust those glimmers of her past.

4.      Hopelessness is having no expectation of success.  And because Dominique has been killed in each of her past lives, she has no reason to feel anything but hopeless. Her feeling of despair magnifies throughout the book and completely alters her as a person, but also propels her into action.

5.      Death is the end of life. And since this is Dominique’s final life, there’s a finality that goes beyond her existence because her death will also affect the Transhumans that are protecting her and the feud between the good Transhumans (the Pure) and the evil Transhumans (the Tainted.)

6.      Love is the strong affection for another. Sometimes it’s so strong that it can lead one to sacrifice for another. In Final Life, love is the one thing that Dominique can count on.

About the Author:
Rose Garcia is a lawyer turned writer who’s always been fascinated by science fiction and fantasy. From a very young age, she often had her nose buried in books about other-worlds, fantastical creatures, and life and death situations. More recently she’s been intrigued by a blend of science fiction and reality, and the idea that some supernatural events are, indeed, very real. Fueled by her imagination, she created The Transhuman Chronicles—a series of books about people who have overcome human limitations. Rose lives in Houston with her husband and two kids. You can visit Rose at www.rosegarciabooks.com. Check her out on Facebook, Twitter, and Goodreads!

a Rafflecopter giveaway
Posted by Megan at 8:00 AM