I'm very excited to have author Katy Krump on the blog for an interview today. Katy is the author of Blue Dust: Forbidden, a YA sci-fi novel.

All teenage girls keep secrets and Kerry Johnston is no exception. More than anyone else she knows how to lie, for ‘Kerry’ is an alias and her life is a nightmare of secrecy, violence and fear. In reality this overweight, limping teenage girl is Qea, a Forbidden child from the Qarntaz Octad, sent to Earth to hide from the warlord she has betrayed. Born third into her family in an overpopulated world where surplus offspring are Forbidden and killed or delivered as fodder for the malevolent Inquisitors, Qea has spent her life in hiding.

Qea (Pronounced Kee-ah) is a girl with an unusual history. She comes from a distant galaxy where warlords rule the law and corruption is rife, so she must become hard to survive, but here on Earth a young man will change her heart and risk her life, changing it forever.

And Katy was kind enough to answer all of my questions!

First, can you tell us a little more about Blue Dust: Forbidden?

Blue Dust : Forbidden is the first in the Blue Dust series. It was born out of my own struggles as an ‘alien’. I emigrated to the UK from South Africa 13 years ago and found it all quite traumatic. I started a blog about living on a new planet as that’s what it felt like to me, and that morphed into Blue Dust. The book is the story of a girl who doesn’t belong anywhere. She comes from a distant galaxy where she is ‘Forbidden’. Born third into a world where, due to overpopulation, the law allows only two children, Qea has had an awful and traumatic life. Her world is ruled by warlords and when she betrays one of them, she’s sent to Earth to hide. There she meets Adam, who challenges everything she’s ever been taught about herself. By allowing him into her life, Qea puts them both in danger. The book deals with alienation and self-discovery…and tells you what to do if you’re abducted by aliens. It’s packed with action and strange alien worlds and touches on the issues that all teenagers face.

What about Blue Dust: Forbidden makes it stand out from other YA sci-fi titles?

Well, for one it’s not about werewolves and vampires and there’s not a witch or wizard in sight. It’s sci fi, but it’s also a thriller and a romance, because life is multi-genre, isn’t it? Sometimes it’s happy, sometimes it’s sad, but it’s also humorous and romantic, and Blue Dust: Forbidden touches on all aspects of life so it crosses genres. While it’s aimed at teenage girls (and boys who aren’t scared of a bit of romance), Blue Dust: Forbidden is being enjoyed by a wide range of age groups, which is wonderful and surprising. From 10 year old boys to 79 year old grannies and everyone in between, it seems to touch something in everyone – not at all what I had in mind when I wrote it.

Describe yourself in 5 words.

What is the most important thing you’ve learned as a writer?

Never give up. Believe in yourself and your work and get a good editor.

Can you describe your writing style? 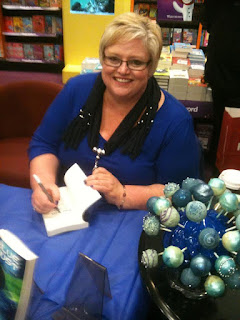 I wrote Blue Dust : Forbidden differently from the other books I’ve written. Every day I continued from where I’d stopped the day before so that I got the story down before the seemingly endless task of rewriting and editing began. I worked as a television writer for a long time, so I write very visually, painting a picture with my words to enable the reader to see the strange world of the Qarntaz Octad clearly in their minds’ eye. I love words, and spend a lot of time finding the ‘perfect’ word for a sentence. I don’t dumb down my writing even though it is for teenagers and I’ve had some interesting comments from young readers who enjoy the words I use. My thought is that if someone doesn’t understand a word they can look it up, which is what I used to do and nowadays ‘Doctor Google’ makes it easy. I really hope to inspire my readers in some way.

I have such clear memories of my childhood and teenage years and the uncontrollable passions that could swamp me in an instant. I was a bit of a loner, but I spent a lot of time observing others, in a non-stalker way of course, and it was through these observations that my writing began. Times have changed so much with all the technology and social media that young adults are involved in, and yet the essence of growing up, discovering your true persona, parental and sibling relationships, negotiating the quagmires of friendship and love, remain constant, and I hope that through my writing I make sense of this and offer some hope for the Young Adults that read my work.

I’ve always had an over-active imagination, something my teachers didn’t always appreciate, so writing for the YA market helps me excise and share some of the weirdness in my head. I loved sci fi television programmes, which back then were filled with dodgy special effects and cardboard rocks, because they made me realise I wasn’t the only one with thoughts about other worlds. But there has to be a story and strong characters who undergo challenges and face terrible dangers. YA writing is a rapidly expanding genre and I’m delighted to finally be able to share my inner stories with a receptive and intelligent audience, an audience that is a whole lot more savvy and mature than I was at that age. Despite the Facebooking and the Tweeting and Tumbl’ng and You-tubing that seems to consume an inordinate amount of time, teenagers today face the same challenges as I did and a whole lot more besides. They’re a fantastic audience who I hope will understand that they do matter and that their opinions are valid and important, no matter what their age.

Who are your biggest literary inspirations?

I have a very eclectic taste in my reading. I love thrillers – Jo Nesbo, Christina Lackberg, Karen Slaughter, John Grisham, Dick Francis but I also love Jane Austen, Dickens, Emily Bronte and writers like Kate Atkinson, Zadie Smith, Alexander McSmith. I think I’ve taken inspiration from everyone I’ve read to date. It’s interesting how while reading I’ll suddenly find a word I love and I’ll then make sure to use it in my own work. It’s a fine balance between writing my own stuff and reading the works of other great writers. John Creasey, a very prolific writer who has now sadly gone out of fashion, was my first introduction to crime fiction and really inspired me to start writing. Beatrix Potter and Enid Blyton were my very early inspirations, instilling a love of reading and writing that’s never gone away.

What’s next on your writing agenda?

I’m working on the sequel, Destiny, which is due out later this year. I’m planning book three, Insurrection,  and am also percolating another entirely new series- still in the ‘thoughts in my head’ stage. And of course adapting my novel for film, so it’s all go, go, go’. I’m constantly writing, and often work on more than one project at a time. I try to work on film and television scripts to give myself a bit of variety. Another book of mine will be published next year too, but I need to work on a few issues, so am mulling over these at the same time.

Any words of wisdom for aspiring writers?

Never give up! Write as much as you can, get a good editor – never send in the first draft, take advice from said good editors, don’t expect your family and friends to be much use in giving an honest opinion on your writing – unless they’re writers too, learn how to rewrite, rewrite and rewrite, try not to be too ‘precious’ about your work. Sometimes you have to delete a sentence or paragraph or even chapter you love because it doesn’t contribute to the work as a whole. Read a lot, take time to find your own voice and the genre that suits you best. Never surrender!

Thanks so much for stopping by!


Thanks again to Katy and be sure to check out the links to Blue Dust:Forbidden.

Goodreads | Kindle | Amazon | Waterstones
Posted by Megan R at 4:00 AM