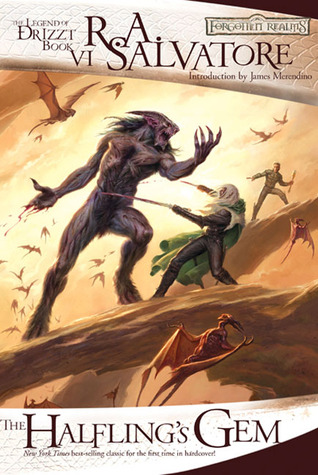 
Regis has fallen into the hands of the assassin Artmis Entreri, who is taking him to Calimport to deliver him into the clutches of the vile Pasha Pook. But Drizzt and Wulfgar are close on their heels, determined to save Regis from his own folly as much as from his powerful enemies.


This installment opens where the last one ended (with the feels) and Drizzt and company are off an another adventure to rescue their little buddy Regis. Regis is actually my favourite of the group, probably because he is the least "good" of the main characters. While of other claim to pursue noble paths and work to rid the world of "evil races" and bring honour to themselves and their families and all that jazz, Regis eats too much and steals stuff.

I was also happy to see Artemis Entreri take a fairly major role in this one. He is my favourite kind of villian: brutal and ruthless and evil, but still with some messed up code that he lives by.

In this book, as with the previous ones, the characters are all larger than life superhumans (or superdwarves or superdrow or whatever). And also super lucky. At some points, I kind of wish one of them would be killed or defeated in some way, just to make it more realistic. Like maybe 5:1 odds could actually be a problem.

Overall, if you enjoyed the previous books, you will enjoy this one, as it's more of the same. If you're into high fantasy, this series is probably perfect for you.

And because I enjoy sharing the old school covers... 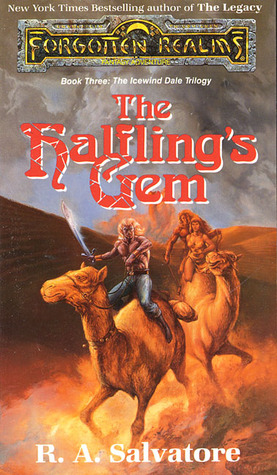 Email ThisBlogThis!Share to TwitterShare to FacebookShare to Pinterest
Labels: R. A. Salvatore, The Halfling's Gem, The Icewind Dale, The Legend of Drizzt