Review: How We Fall

So, I kind of took a month off from blogging. Oops. But I'm back and will be doing my best to post more regularly. Because I have a few books coming out in 2015 that I am pretty excited about! 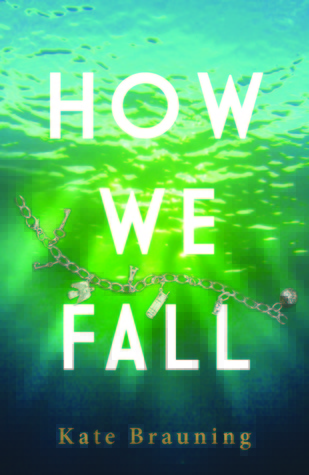 Synopsis:
Ever since Jackie moved to her uncle's sleepy farming town, she's been flirting way too much--and with her own cousin, Marcus.
Her friendship with him has turned into something she can't control, and he's the reason Jackie lost track of her best friend, Ellie, who left for...no one knows where. Now Ellie has been missing for months, and the police, fearing the worst, are searching for her body. Swamped with guilt and the knowledge that acting on her love for Marcus would tear their families apart, Jackie pushes her cousin away. The plan is to fall out of love, and, just as she hoped he would, Marcus falls for the new girl in town. But something isn't right about this stranger, and Jackie's suspicions about the new girl's secrets only drive the wedge deeper between Jackie and Marcus--and deepens Jackie's despair.
Then Marcus is forced to pay the price for someone else's lies as the mystery around Ellie's disappearance starts to become horribly clear. Jackie has to face terrible choices. Can she leave her first love behind, and can she go on living with the fact that she failed her best friend?

Review:
Let me start by saying that I'm a science fiction\fantasy girl. I like action and somehow it's even better if there are dragons or airships or aliens. However, every so often, I throw in a contemporary read to spice things up. So when I got a copy of How We Fall, I decided to give it a try.
Unfortunately, this was not the book for me. There were about 40 pages near the end that I enjoyed because there was action. However, the rest I did not. There is such a strong forbidden love thing going on, which I don't really like. I felt like most of the book was Jackie complaining and/or being a b****, all relating to her forbidden love. So there's my problem. I didn't like the main character and I found the focus on forbidden love boring. I did enjoy the mystery plot running through the book, but there wasn't enough of it compared to the love-whining to come close to saving this book for me.
I didn't really connect with the characters, which didn't help things. As I said, I didn't like the narrator Jackie. I appreciate how brave she is at the end, but other than that, not a fan. I can't really blame Marcus for a lot of how he acted, but that doesn't mean I liked him either. The other characters had such small roles that I didn't form too much of an opinion on them.
However, my problems with the book completely come down to personal preference. I don't generally like romance books (I like romance in books, but prefer it to take a back seat to action). If romance is your thing, check out some more reviews and don't base your decision on this one. If you're more of an action and adventure reader, give this one a pass.

Email ThisBlogThis!Share to TwitterShare to FacebookShare to Pinterest
Labels: How We Fall, Kate Brauning