Review: Not Your Ordinary Wolf Girl 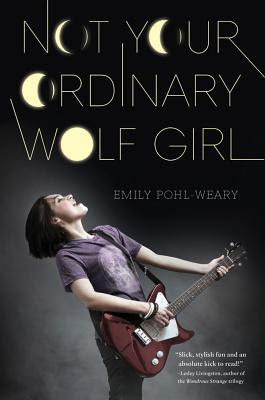 Eighteen-year-old rock star Sam Lee isn't like other girls. She's the super-talented bass player and songwriter for an all-girl indie band and an incurable loner. Then one night after a concert in Central Park, she's attacked by a wild dog.

Suddenly, this long-time vegetarian is craving meat--the bloodier, the better. Sam finds herself with an unbelievable secret and no one she trusts to share it. And so begin the endless lies to cover up the hairy truth...

When a new girl gang appears in the city--with claws and paws--Sam suspects there's a connection to her own inner beast. Trapped in a tug-of-war between her animal and human selves, forced to choose between the guy who sparked her carnal appetite and the one who makes her feel like a normal teenage girl, Sam has to unravel the mysteries of the werewolf world before her bandmates, her mother, and the media catch up to her.

Unfortunately, this book really didn't do it for me. Which really sucks, because a book featuring a mash-up of the music industry and werewolves should have been awesome! Too bad this one was weighed down by unlikeable characters, a weak plot and a bit of a love quadrangle.

Our main character Sam is completely insane. I understand that privacy is important for celebrities, but Sam is absolutely the most antisocial character I've ever read. And she does some really weird crap that I still don't understand. And he character growth at the end felt rushed and unbelievable.

As the for the boys in our love quadrangle, well, they were all creepy and/or sleazy and I didn't like any of them. Harris, as sweet as the book sometimes tried to make him out to be, was a total slimeball. On the other hand, Marlon had his heart in the right place I think, despite his crazy stalker tendancies. And finally, Owen was downright crazy and creepy. As he's not really a viable option in this love quadrangle, I guess that's okay.

The rest of the characters were totally flat and boring. In fact, when one of them has a big reveal, I was more just relieved that her character now went beyond being "nice."

The plot on this one felt really weak to me. It felt like very little actually happened in this book. It was mostly Sam just freaking out about stuff and acting crazy, with the boys acting sleazy and/or creepy.

Overall, Not Your Ordinary Wolf Girl was a disappointment. It had a lot of potential, but I couldn't get past my dislike of every major character.

Goodreads | Not Your Ordinary Wolf Girl

Email ThisBlogThis!Share to TwitterShare to FacebookShare to Pinterest
Labels: Emily Pohl-Weary, Not Your Ordinary Wolf Girl