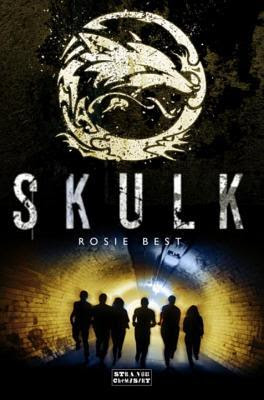 To some, Meg Banks’ life might look perfect – she lives in a huge house in West London, goes to a prestigious school, and has famous parents. Only Meg knows the truth: her tyrannical mother rules the house and her shallow friends can talk about nothing but boys and drinking. Meg’s only escape is her secret life as a graffiti artist.

While out tagging one night, Meg witnesses the dying moments of a fox… a fox that shapeshifts into a man. As he dies, he gives Meg a beautiful and mysterious gemstone. It isn’t long before Meg realises that she’s also inherited his power to shift and finds an incredible new freedom in fox form.

She is plunged into the shadowy underworld of London, the territory of the five warring groups of shapeshifters – the Skulk, the Rabble, the Conspiracy, the Horde, and the Cluster. Someone is after her gemstone, however, someone who can twist nature to his will. Meg must discover the secret of the stone and unite the shapeshifters before her dream of freedom turns into a nightmare.

Skulk is a very unique and enjoyable take on shifters. The world building is where this one shone for me. I liked the structure and system of shifters that Rosie Best put together.

Meg is a likeable main character that I immediately felt for. Not only has she been thrust into this crazy shifter world full of politics and mysteries and betrayals, but she has some crazy stuff going on at home. I also really liked that she actually had a hobby! So often I find that girls in YA books don't actually do anything other than talk to their friends and fall in love with cute boys. In high school, I was always playing sports, participating in our school trivia club (major nerd) or horseback riding, so I love seeing heroines with interests as well.

There was one major thing that bothered me on this one and that was Meg mother. She was so horrible, to the point where it was unrealistic and negatively affected my enjoyment of the book. What kind of woman locks all kitchen cupboards because she thinks her daughter is overweight? And then slaps her, calls her a bitch and locks her in a closet for hours when she's caught eating some almonds? I mean really.

The other minor complaint that I have is that Meg was a bit slow at the end when it came to figuring out what was really going on. I had called in chapters before. However, that part didn't bother me much and I still enjoyed the store.

I mentioned early that the world building on this one was done well. It was just such a unique concept that I appreciated. The other area where this one shone was with the secondary characters (with the exception of Meg's mom). I totally fell in love with Addie and James and Mo and Susanne. When I love that many secondary characters, I know I've found something special.

Skulk has a really unique premise that makes it stand out from all the other urban fantasy YA books being released. While a bit predictable, the world building and secondary characters (for the most part) were great in this one. I'd definitely recommend this one to reads who enjoy YA urban fantasy. Plus I love books set in London.