Review: The Life and Death of Lily Drake 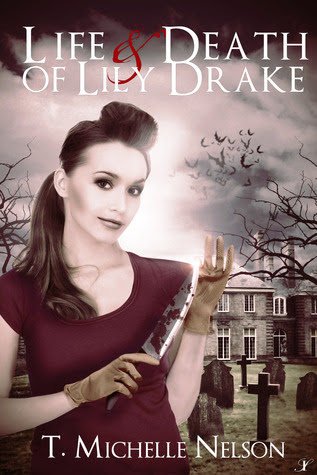 For Lily Drake, slaying vampires is easy...Dating them is the hard part.

Lily Drake is your everyday hard-working single mom…until a gorgeous vampire shows up on her front door who she mistakenly assumes is her blind date for the evening. As one crazy scenario after another unfolds, Lily finds herself falling in love with two vampires, slaying the evil ones, and being prophesied as the savior of the entire undead race.

Deciding between pizza and Chinese take-out will no longer be one of the hard decisions facing Lily Drake once she is emerged into vampire society. Humanity or immortality? That doesn't hold a candle against this question - which of the two handsome vampire cousins?

The Life and Death of Lily Drake is not your typical vampire love story. It’s a tale about the humorous mistakes a woman makes simply trying to survive not only life, but the dating scene. How will Lily manage working full-time, taking care of her young son and fighting the undead at every turn?

Lily will have to figure it out, but who better to save the world than a mom?

As someone who reads a lot of young adult, The Life and Death of Lily Drake was a bit of a departure for me as a reviewer. There's a big difference between a angst teenager and a 30-something single mom. That said, I did enjoy the change, there was a lot less beating around the bush than we find in most YA novels.

Let's start with Lily. My favourite things about Lily were how much she cares for her son and how kick-ass she ends up being. While I don't have any children yet, I am a major family person, so I'm glad family was so important to Lily as well. However, I found that Lily's love of her family sometimes felt a bit false, considering how she seems to send her son away for week-long sleepovers while she works through a vampire love triangle (more on that later). I honestly preferred Lily in the last 20% of the book, where she becomes majorly kick-ass in order to save her son.

I had a few issues with Lily's character, however. She does something that I absolutely cannot forgive her for (I don't want to say, as it would be a spoiler). Also, she drove me a bit crazy with her refusal to make one decision or another in regards to becoming a vampire (that's not a spoiler, it's in the blurb). It's like she completely expected to have her cake and eat it too and it got on my nerves.

And on to the love triangle. Because I read mainly YA fiction, which has way too many love triangles, the love triangle in Lily Drake was nothing new and I found it annoying overall. Besides, for me at least, it was such an easy decision! The guy who likes the same things as you and you have an absolute blast spending time with, or the guy who is "romantic" and bossy. I'd pick fun over romance any day!

Overall, The Life and Death of Lily Drake had it's ups and downs for me, but if you're a paranormal romance fan with a thing for vampires, you should enjoy it.

I like the cover, but I don't really think that the model fits with my view of Lily. She looks too young (and I can't see Lily with that hairstyle).