I'm excited to have Rich Pitman, author of the Jimmy Threepwood series, on the blog today for an interview. Before we get on to the interview, I just want to say how much I love the concept of Jimmy Threepwood. As a kid (and even now), I tended to cheer for the villians, especially Wile E. Coyote and Dr. Claw (from Inspector Gadget - probably because he had a cat), so I am definitely into the premise Rich has put together. 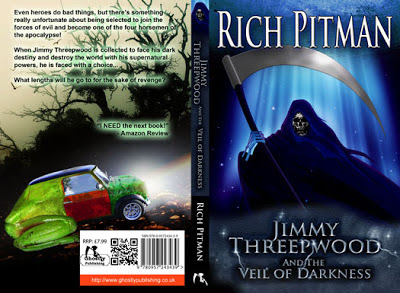 First, can you tell us a little more about Jimmy Threepwood?

I wanted to write something a little different, something dark filled with creepy characters. I didn’t want it to be the hero struggling, but ultimately winning, I wanted to explore and make the villain the lead character. I wanted to investigate why a villain such as Darth Vader, Lord Voldamort or the Child Catcher were evil? What happened to them?

Jimmy Threepwood is a dark fantasy adventure series of five books starting with Jimmy Threepwood and the Veil of Darkness. The story is about a young boy destined to one day destroy the world. Due to events revealed later in the book, Jimmy is unloved by his parents and not allowed friends or close connections.

Jimmy is collected from his home and handed to a sinister creation, the Gatekeeper, Lord of life and death. He is taken to a forest where he meets three other children, each pulsating evil and he is given his first powers, thus starting his journey to end the world… But Jimmy is different. There is one clear difference between Jimmy and his companions. Love. Love for his father…But a plan is set in place to sever the affection casting Jimmy on a path of vengeance and anger.

The story is filled with mythical creatures, magic and puzzles as the four children search for powers to unlock the secrets of the world. The essence of the book is ‘…even heroes do bad things’

I think it’s very cool that you have written a novel centered around a character who would generally be considered a villain. What was your inspiration for this and why do you think young readers enjoy it?

The inspiration – I love fantasy stories but the majority are written about the hero and what happens to them. They have a grave struggle but ultimately win. Everyone loves a hero.

I just thought it would be interesting to look into the past of four children to find out what happened to them? How did they end up in the forest ready to destroy the world?

The response from readers of all ages in the UK has been great. It’s a new twist on a modern tale of Evil versus Good. The basis of the story is built on whether Jimmy is actually the villain? Will he go through with it and ultimately destroy the world?

What is the age range of the book?

That’s an interesting question. The book was written as a children’s book. Maybe for children aged 11+. But the response I’m having is that although children love the creatures and magic, it’s actually been read by more adults.

Describe yourself in 5 words.

I would say – Imaginative, energetic, passionate, thoughtful and creative.

What is the most important thing you’ve learned as a writer?

Editing. I can’t count the times I’ve gone back through the story and come up with new ideas or detail for certain sections. It has to be put the story on paper then go over and over it adding layer after layer.

Can you describe your writing style?

As I write the story unfolds in my mind, almost like a movie. I think about what the next section of the story is about and draw it in my notebook. Then…and this is where the magic happens, I go for a run and think about the story as it plays in my mind.

Then I write what I saw and how the characters felt reacted etc.

Who are your biggest literary inspirations?

I would say mostly Steven King. I love the horror side of his books and the way you look around the room checking you are alone as you read them. I’ve tried to make Jimmy Threepwood a little creepy, but it’s not scary, mostly just dark

What’s next on your writing agenda?

Jimmy Threepwood and the Veil of Darkness is out now on Paperback and Ebook.

Any words of wisdom for aspiring writers?

Keep going. Publishing is a very difficult world and it gets harder when you have a book out. Read and read your story and when you are finally ready send it off to agents.

The one bit of information is, don’t be too hasty to send it off. Make sure your story is completely ready and polished before you send it off. You don’t get too many second chances with an agent.

Where can we buy the book?

The book is available in Paperback and Ebook from Amazon

, Waterstones and WHSmiths. It’s also available in a number of places across the internet.

Thanks so much for stopping by!
Posted by Megan R at 4:00 AM