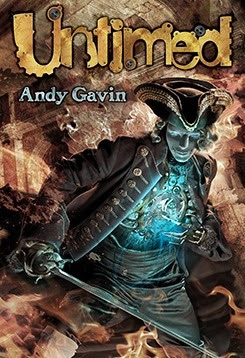 Charlie’s the kind of boy that no one notices. Hell, even his own mother can’t remember his name. And girls? The invisible man gets more dates.

As if that weren’t enough, when a mysterious clockwork man tries to kill him in modern day Philadelphia, and they tumble through a hole into 1725 London, Charlie realizes even the laws of time don’t take him seriously.

Still, this isn’t all bad. In fact, there’s this girl, another time traveler, who not only remembers his name, but might even like him! Unfortunately, Yvaine carries more than her share of baggage: like a baby boy and at least two ex-boyfriends! One’s famous, the other’s murderous, and Charlie doesn’t know who is the bigger problem.

When one kills the other — and the other is nineteen year-old Ben Franklin — things get really crazy. Can their relationship survive? Can the future? Charlie and Yvaine are time travelers, they can fix this — theoretically — but the rules are complicated and the stakes are history as we know it.

Untimed is a very fun YA time-travel novel. It features a likeable main character Charlie and fun, flawed secondary characters to back him up.

Untimed gives a fresh take on the mechanics of time travel. While not everything is explained, the gist is that males can travel 'downtime' and females can travel 'uptime'. I found this to be an interesting twist on time-travel. In general, time-travelers don't have a lot of information on time-travel in general, so if you're the kind of reader who liked their time-travel technical and 'quantum-physics-y', then this isn't the book for you. But if you enjoy a fun, exciting time-travel read, definitely give Untimed a go.

I can't quite say that there's no love triangle in this one, but it's certainly not your usual YA kind. The story is written from the point of view of our hero, Charlie, who has to go up against a flashy-talking, boxing, fencing dandy in order to get the girl.

And on to the girl: Yvaine. At first I wasn't sure about her, mainly because she slept around a bit. Which is nothing against her (after all, she was a single woman in the 1700's with no family or prospects just trying to get by), but it made it a bit difficult for me to connect with her. However, once we get past that part, her kick-ass-ness shines through and I became a fan.

I also loved Charlie's Aunt Sophie. She totally strikes me as a rogue-type character you might see in a fantasy novel. Another thing that struck me about Sophie's character was the way Andy Gavin handled her sexuality. Like it was a non-issue. Ok, she's gay, sweet, move on. It doesn't try to overwhelm the story, which I really appreciated. Because when we continue to make an issue about something, it will remain an issue, whereas if we just accept it, it will be easier for the reader to accept it and get back to the action!

Charlie's dad was another thing entirely for me. For being an academic-type, he seemed super closed-minded, but towards the end he improved for me. Also, he should have spent much more time with Charlie!

Despite it's upbeat tone, Untimed is actually pretty dark. Charlie's mom can't remember his name. Ever. His dad and aunt can, but they're only around for 4 weeks of the year. What a crappy hand Charlie was dealt! Beyond that, there's some major domestic abuse (as in, unconscious for the better part of a day). Well, that and a hanging or two.

Overall, I enjoyed Untimed a lot. It was fun and fast-paced. Charlie is a likeable, but reckless, main character (not to mention a hormonal 15-year-old).

I like this cover. It has a cool, steampunk-y vibe to it. However, I'm not sure how much it draws the reader in.

Source: I received a copy in exchange for an honest review.

Don't Just Take My Word for It: Nocturnal Book Reviews | I am, Indeed | Mother/Gamer/Writer

Be sure to stop by the Goodreads page, where there's a giveaway for an autographed copy!
Posted by Megan R at 4:00 AM