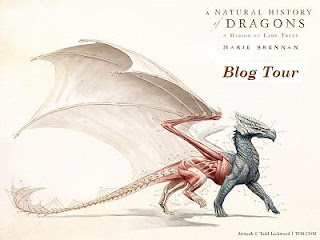 I'm super excited to be taking part in the blog tour of A Natural History of Dragons. Today I'll be sharing my review, as well as a guest post by the author, Marie Brennan.


You, dear reader, continue at your own risk. It is not for the faint of heart—no more so than the study of dragons itself. But such study offers rewards beyond compare: to stand in a dragon’s presence, even for the briefest of moments—even at the risk of one’s life—is a delight that, once experienced, can never be forgotten. . . .

All the world, from Scirland to the farthest reaches of Eriga, know Isabella, Lady Trent, to be the world’s preeminent dragon naturalist. She is the remarkable woman who brought the study of dragons out of the misty shadows of myth and misunderstanding into the clear light of modern science. But before she became the illustrious figure we know today, there was a bookish young woman whose passion for learning, natural history, and, yes, dragons defied the stifling conventions of her day.

Here at last, in her own words, is the true story of a pioneering spirit who risked her reputation, her prospects, and her fragile flesh and bone to satisfy her scientific curiosity; of how she sought true love and happiness despite her lamentable eccentricities; and of her thrilling expedition to the perilous mountains of Vystrana, where she made the first of many historic discoveries that would change the world forever.

Marie Brennan introduces an enchanting new world in A Natural History of Dragons.


Victorian and Victorianish fantasy is big these days, isn’t it? I’ve heard a variety of theories as to why, my favorite of which is probably the one postulating that, just as the bucolic world of the Shire was the just-outside-living-memory past Tolkien looked to, so the height of the Industrial Revolution is for us. I don’t know if it’s true, but it implies we might have Depression/Dust Bowl fantasy as a big thing fifty years from now, which is an intriguing idea.

Anyway, my personal theory for why we’ve got so much nineteenth-century fantasy these days goes like this:

The Victorians were crazy.

Not in the medical sense of the word, at least not by our current standards. (Hysteria, bah.) But very much so in the “what the blazes were you people THINKING?” sense. More than any other time period or place I can think of, the nineteenth century in Britain, America, and certain parts of Europe lived in the happy delusion that they could do absolutely anything if only they tried hard enough. And sometimes, through sheer persistence and luck and lack of self-preservation instinct, they succeeded. As a result, the period is chock-full of amazing achievements and larger-than-life personalities -- which makes for a really fun narrative environment to play in.

It’s especially fun given that the Victorians were often so rational about their irrationality. Not only did they have ludicrous quack medicine, they dressed it up in pseudo-scientific advertisement! Not only did they have rampant belief in spirits, they assured themselves it was all quantifiably true! (Did you know that a wee Charles Babbage once tried to summon the devil? True fact, at least according to his autobiography. It was for science, you understand, not for personal gain; he was attempting to verify the existence of said entity.) They willingly -- nay, eagerly -- threw their lives into peril on the chance of making new discoveries. That push and pull, the yin and yang of rational organization and irrational enthusiasm, is a tremendous engine for telling stories.

Of course, both of those things have their dark sides. The enthusiasm drove things like imperialism, and science provided a justification for it. I’m an anthropologist; I know what my intellectual ancestors were doing with their skull measurements and other quackery. That’s something modern Victoriain’t fantasy (hat tip to Elizabeth Bear for the term) has to deal with one way or another, whether it grapples with the historical reality or imagines a better alternative.

But I’ve never been much interested in settings where everything is rosy. I like the shining top and dark underbelly of the nineteenth century: technological progress and its human cost, new discovery and the loss of old things, the collision of different cultures and the problems that result. The tension between those things is fascinating. My take on it in A Natural History of Dragons and the sequels is more light-hearted than it was in, say, With Fate Conspire, but that doesn’t mean I’m not still being driven by the same interest. What happens when fantasy runs face-first into a banner era for scientific inquiry? The space in between those two things makes for a very intruiging playground.

First of all, this book is beautiful. I am completely in love with the anatomical-style drawing on the cover. Plus, inside there are lots of great sketches. So visually, this book is worth buy just for how pretty it is!

I should probably say that I've only ever read one memoir and I hated it (Perfection of the Morning: A Woman's Awaking in Nature) and I've never read a fictional memoir like this. But I do love dragons, so that, combined with the beautiful cover, convinced me to give it a try!

This book fits into the genre of Victorian Fantasy, which I kind of consider as a cousin to Steampunk. There's all the strictures of Victoria manners and class, which I enjoy, but with dragons. Which makes it pretty darn awesome!

Isabella was definitely a likeable character for me. She was headstrong and fiercely curious in a time when those traits were not very desirable in a woman. She was just the sort of heroine I like best: strong, smart and independent, without coming across as harsh and unpleasant. I'm very glad she got the opportunities that she did, as she would have had a very miserable life had she ended up marrying a boring, uncooperative man. Instead, she finds not only a husband, but also a co-adventurer in Jacob.

I loved Jacob; he was so kind to Isabella and encouraged her to follow her passion for dragons (for the most part). Besides, I'm sure he would have been equally unhappy married to a silly, dull-witted woman. So they were the perfect pair!

The only think I would have changed about the book is to have more dragons! It got a bit slow in parts, which I know definitely happens in scientific field work, but I would have loved to seen more dragons. There is so serious politic intrigue going on that tended to steal the show away from the dragons more than I would like.

Overall, A Natural History of Dragons was a very enjoyable read and I would recommend it for people who enjoy historical fiction with a bit of fantasy thrown in. 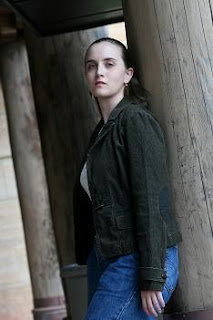 Marie Brennan is a former academic with a background in archaeology, anthropology, and folklore, which she now puts to rather cockeyed use in writing fantasy. She lives in the San Francisco Bay Area. In addition to many short stories and novellas, she is also the author of A Star Shall Fall and With Fate Conspire (both from Tor Books), as well as Warrior, Witch, Midnight Never Come, In Ashes Lie, and Lies and Prophecy. You can find her online at SwanTower.com.