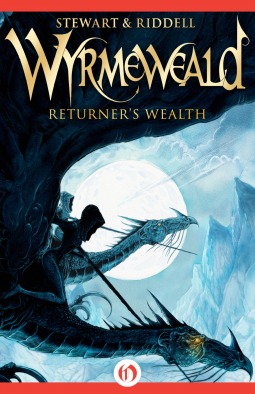 Synopsis:
From the creators of the internationally bestselling Edge Chronicles comes an epic story of dragons!

The wyrmeweald is a hostile place, an arid wasteland where man is both hunter and hunted, and where the dragon-like wyrmes reign supreme.

Seventeen-year-old Micah enters the wyrmeweald intent on stealing a wyrme egg to sell for a bounty. With the riches such an egg will bring—returner’s wealth—Micah can go home to a life of luxury, and win the hand of the girl he loves. But the wyrmeweald is a treacherous place, and Micah quickly finds himself in mortal danger. When a tracker named Eli rescues him, Micah is forced to prove his worth, and together he and Eli defend a rare wyrme hatchling from kith bandits intent on stealing and selling wyrme eggs.

As Micah soon discovers, this hatchling has a guardian already—the beautiful, brave, and dangerous Thrace. Micah and Thrace make the worst possible match: Micah is a would-be bandit, and Thrace is a wyrme rider-assassin, devoted protector of the wyrmeweald. Yet their chemistry is undeniable, and soon Micah and Thrace join forces to protect the rare wyrme and battle the evil forces that encroach on their native habitat. But is there anything left in the devastated wyrmeweald to be saved?

Review:
Returner's Wealth was a bit of a mess for me. With poor pacing, a weak plot, a weirdly inconsistent structure and generally boring characters, even the presence of dragons couldn't save this one.

my biggest issue with this one was that I found it boring. It honestly took me almost a month to read this one because I kept getting bored and starting other books. One problem was that I felt like I was thrust into the middle of the story without any background knowledge. Then there were the alternating chapters of past and present for a while until they abruptly stopped.

I also felt like very little actually happened in this one. There was a lot of wandering around with bits of action mixed in. I was expecting a big climax, but that also felt small and undeveloped.
I also had issues with most of the characters. Micah was stupid. That's really all there is to that. Thrace was weird and unlikeable and I really didn't understand what happened with her and Aseel at the end. And the romance was instant and creepy. Micah was checking her out when she is freaking dying from falling off a cliff! But her can't stop thinking about how hot she is. I did like Eli, although his personality was pretty mild.

My favourite part of this one was the world. You could tell how much work and thought the authors had put into creating this harsh world full of a variety of different wyrme species. However, as a mentioned above, I think the world could have been introduced to the readers more clearly.

Overall, I was disappointed with Returner's Wealth. I love dragons, but this one had too many flaws for me to enjoy it.