Review: Quest for the Scorpion's Jewel 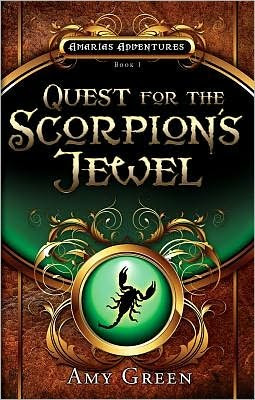 The Amarias Adventures are centered around Jesse, a young teenage boy who lives with his aunt and uncle in the world of Amarias. A tyrant king lords over the Amarian people, some of which have banded together to form the Rebellion against their ruler. Things are not easy in a land of constant upheaval, but this environment spurs Jesse to move beyond his self-doubts and physical infirmities as his faith is tested and refined.

Book 1 Quest for the Scorpion's Jewel One night as he is working at his aunt and uncle's inn, Jesse is visted by three members of the Youth Guard who convince him to join them on their quest for the Scorpion's Jewel. They have been hand-selected by the king for this task and their success will win them great favor, but they need his help. Their leader has been seriously injured by the Rebellion and must remain behind. Can Jesse possibly be the leader they're looking for? Will he learn to put his faith in something or someone greater than himself? What path will he follow?

Overall, I found Quest for the Scorpion's Jewel to be an enjoyable read. It's a short one at 172 pages and is an adventure-filled middle grade read. I enjoyed the major theme of loyalty and friendship that ran though this novel. It is Silas and Rae's loyalty to their squad leader Parvel that brings them to Jesse in the first place. I love how these young people always had each other's back, even though it often would be much easier to just look the other way.

Jesse was a likeable main character who shows a lot of determination and strength, despite a physical handicap. His loyalty to his companions, Rae and Silas, is impressive and I was glad to see that this loyalty was returned. All of the characters were likeable, with each showing a distinct personality.

The plot was fun and filled with interesting adventures that I think will appeal to a lot of young readers. I think this book will also appeal to a lot of parents, since it has a lot of good messages for kids (loyalty, doing the right thing etc) without being boring.

One thing that surprised me about this book was the religious aspect (yes, I realize it's right there in the blurb, but I sometimes don't read those very thoroughly). Jesse has never really believed in God, but through the book he begins to find some faith. As a non-Christian, I'm always wary of books that delve into religion in this manner. However, I didn't find the book to be overly preachy and the adventure aspect of the book definitely outshone the religious aspect.

Overall, I found Quest for the Scorpion's Jewel to be a fun, enjoyable middle grade read. I would recommend it for readers who enjoy adventure and also to parents who want to feel comfortable with what their children are reading.

I'm not crazy about this cover. I can see that the designer was going for, with the medieval feel of the story, but it doesn't stand out enough for me.

Source: Received from the publisher in exchange for an honest review (via Netgalley)

Don't Just Take My Word For It: Over a Cuppa Tea | Pretty in Fiction | Best Books
Posted by Megan at 5:00 AM

Email ThisBlogThis!Share to TwitterShare to FacebookShare to Pinterest
Labels: Amy Green, Quest for the Scorpion's Jewel