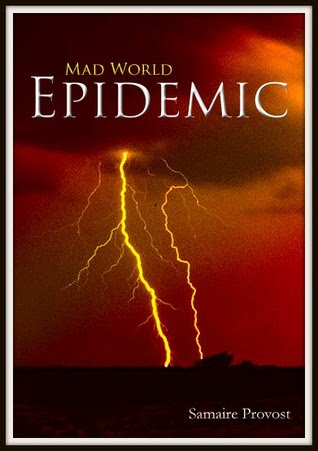 The Black Plague is ancient history. It killed 100 million people nearly seven centuries ago, halfway around the world from the technologically advanced research center at Stanford University. Scientists there have recently begun examining samples of bone marrow from plague-infected corpses unearthed in Europe. All the necessary safeguards are in place. What could go wrong? Alyssa and Jake are away with their class on a highly anticipated year-end trip to Broadway with their senior acting class when all hell breaks loose at home. Traveling back, and trying to find their families, they encounter deadly results. Riots are breaking out. People are being evacuated. And they have no idea what's happening to their families. Horrific ordeals, heart-pounding tragedy, and chance encounters harden them for what lies ahead. Faced with tormenting decisions, they're forced to follow their instinct for survival at any cost - even when the cost is a heart-wrenching decision of life or death. A harrowing adventure of frightening discoveries, horrifying confrontations and narrow escapes in Epidemic, the first installment of the Mad World series. Find out what's got everyone so terrified.

This book started out a bit rocky for me. I had trouble connecting with Samaire Provost's writing style, which I found to be a bit repetitive, simplistic and unappealing. I also had some issues with the narrator, Alyssa, since she came off a bit conceited in the beginning, saying things like "I was the ringleader of our group of friends. I'd excelled in our debate and speech classes and last fall was voted class president of our school." and "With longer hair, and my maturing, both physically and mentally, I'd come into my own."

Overall, I'm glad I stuck with this book, since it improved after the rough beginning. Alyssa's cocky comments disappeared and the fast-paced action overshadowed the flaws in writing style.

I'm a huge fan on the zombie genre and, while this book wasn't ground-breaking, it read like an above-average zombie film. No painfully stupid characters or rule-breaking zombies is always a good thing in my book. Samaire's version of the zombie plague is hyper-virulent strain of Yersinia pestis, the virus responsible for the Black Death. As an animal health major, I prefer not to focus on the science behind zombies, since that's where you run into scientific issues and it takes away all the fun. So I simply accept that there are zombies and a cursory explanation of their origin is enough for me.

As I mentioned above, this book reads like a zombie film. Character development is secondary to action, which doesn't bother me in a fast-paced zombie read. Once in a while Samaire's writing style would trip me up, but for the most part, I followed the fast pace of the action with no trouble.

The only plot point that I did question was the lack of conflict within the group. I think a bit of group conflict improves any zombie story and I found it a bit realistic that no one, especially a doctor, would question a 17-year-old leading the group. However, this complaint was fairly minor and overall I found it to be a fairly enjoyable, action-packed read.

I'm not crazy about this cover. It should have zombies on it!

Source: Reviewed as part of the blog tour in exchange for an honest review.

Don't Just Take My Word For It: how I see it | Little Read Riding Hood | Queen of All She Reads

a Rafflecopter giveaway
Posted by Megan at 4:00 AM