Review: Broken by A. E. Rought 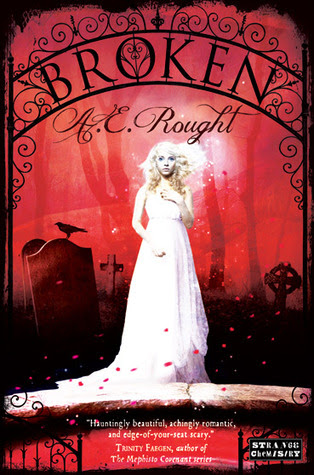 Imagine a modern spin on Mary Shelley’s Frankenstein where a young couple’s undying love and the grief of a father pushed beyond sanity could spell the destruction of them all.

A string of suspicious deaths near a small Michigan town ends with a fall that claims the life of Emma Gentry's boyfriend, Daniel. Emma is broken, a hollow shell mechanically moving through her days. She and Daniel had been made for each other, complete only when they were together. Now she restlessly wanders the town in the late Fall gloom, haunting the cemetery and its white-marbled tombs, feeling Daniel everywhere, his spectre in the moonlight and the fog.

When she encounters newcomer Alex Franks, only son of a renowned widowed surgeon, she's intrigued despite herself. He's an enigma, melting into shadows, preferring to keep to himself. But he is as drawn to her as she is to him. He is strangely... familiar. From the way he knows how to open her locker when it sticks, to the nickname she shared only with Daniel, even his hazel eyes with brown flecks are just like Daniel's.

The closer they become, though, the more something inside her screams there's something very wrong with Alex Franks. And when Emma stumbles across a grotesque and terrifying menagerie of mangled but living animals within the walls of the Franks' estate, creatures she surely knows must have died from their injuries, she knows.

Wow. I feel so many things went wrong for me with this book. The first 80% of this book had me bored and waiting for the excitement. The last 20% was exciting, but I had trouble getting into it by that point.

I think one of the main problems for me with this one is that it wasn't what I expected. The first 80% was basically high school romance. Emma bounces from mopey (her boyfriend died a few months ago, fair enough) to flirty and back again like an emotional yoyo. There's serious instalove, although there is an explanation for it. There's a lot of mooning over guys and self-loathing, followed by a lot of neck-kissing.

I didn't mind Emma, but I didn't really connect with her either. I pitied her in the beginning as she mourned the death of her boyfriend, Daniel, but eventually I think I got a bit bored of her. As for Alex, he was nice, but too broken and possessive for my taste. So I didn't have a solid connection with either character and with chapter after chapter of romance and flirtation, I was a bit bored.

Things definitely picked up in that last 20% of the book, but I really wish that the action had been more evenly spread through the book. Overall, I found the plot to be very predictable. One thing that majorly bothered me was the villian. He was completed one-dimensional. A character whose only trait is being evil is no fun at all. I like hints of what drives a character to do bad things, not just a remorseless psychopath. And there's another character (trying to avoid spoilers here) that I still have no clue about his/her motives.

As you can tell, this book really didn't click for me. But the one thing that I did love was the idea. A Frankenstein retelling is so cool! I'm just really bummed about the execution. The premise alone bumped this one up an entire rating. However, there was way too much romance in this one for me. I was really hoping for a bit more substance and action

Finally, there were a couple things that drove me absolutely up the wall. First, Alex is constantly messing with Emma's hair. Like, he takes her hair out of a ponytail or braid at least 4 times throughout the book. Seriously bro-slice, the girl clearly has a reason for doing her hair a certain way, so stop messing with it. Honestly, if my boyfriend did that, it would drive me crazy! The second thing is that Emma is constantly describing the way Alex smells. Like leather and lightning. Seriously, lightning? I've never been struck by lightning, but I think it would just smell like burning hair. I asked my boyfriend what lightning smells like and he had no clue, but suggested it might smell like ionized air or ozone. Neither of which smell good.

Source: I received an ebook in return for an honest review.

Don't Just Take My Word For It: The Daily Prophecy