I'm very excited to have author Shauna Allen on the blog today to share some bios of two characters from her recently released book, Inked by an Angel. 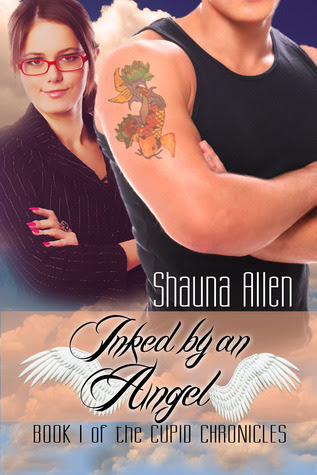 Tattoos…
Jed Gentry is doing just fine, thank you very much, running his tattoo studio in Austin, Texas.  So what if people think he’s a bit on the surly side?  He’s been burned by his ex who sticks around to torture him and he lives with a family heartache that he’d rather not talk about.  But he’s got a thriving business, his dream car, and good friends.  Not much to complicate things.  At least, not until she walked in…
Full name: Jedediah David Gentry
Number of tattoos: 3 plus a few surprises…(you'll have to read the book to find out what and where!)
Number of piercings: 5
Dream car: Already owns it. A '67 Shelby Mustang. Sweet ride.
Factoid: He traveled to Japan several years ago to study the ancient form of tattooing known as “Irezumi” and he has a great respect and love for the entire Japanese culture.
Jed's playlist:
Switchfoot – Dark Horses
Black Sabbath – Paranoid
Foo Fighters – Monkey Wrench
Led Zeppelin – Rock and Roll
Rolling Stones – You Can't Always Get What You Want
Deftones – Digital Bath

Accountants…
Kyle O’Neill has had it with being the sheltered daddy’s girl at the family accounting firm and is ready to spread her wings and fly on her own for the first time.  Unfortunately, it seems she’s about to fall flat on her face when her first and only client is – gulp — a tattoo artist!  Her country club upbringing certainly hasn’t prepared her for this place or the sizzling attraction her traitorous body feels for the grumpy owner…
Full name: Kyle Elizabeth O'Neill
Dream car: Toyota Prius. No, really. She really cares about the environment.
Skill set includes: She can perfectly set a formal dinner place setting, fold a fitted sheet like nobody's business, froth a meringue spiky enough to give Martha Stewart a run for her money, and though she doesn't currently have one – she knows the exact temperature a wine cellar should be maintained at all times dependent upon humidity and other factors.
Secret crush: She's seen all of Jason Statham's movies at least twice. The Transporter movies three times.
Kyle's iPod playlist: It is ever-changing. (And Jed absolutely hates it, BTW.) But, if you want to know what she's probably listening to today, just check out the current Billboard Pop top forty, and you'll have a pretty good idea!

And…Cupid?
But there is a Divine conspiracy at work here pushing these two together.  And they are hell bent on bucking the Heavenly plan all the way.  Luckily, their angel is a true believer and pulls every trick he knows from under his halo to make this a match made in Heaven.
Who says God doesn’t have a sense of humor?

Tattoos, cupids, and bad boys: Shauna Allen delivers one heck of a read.  Fresh, sassy, and witty - she brings a new voice to romance that readers are gonna love!

Inked by an Angel : Book I of the Cupid Chronicles is available now from Soul Mate Publishing, Amazon and Barnes and Noble!
http://tinyurl.com/afpfrd2
http://tinyurl.com/bzccth8
http://www.soulmatepublishing.com/inked-by-an-angel/

***
Shauna grew up an only child with two open and loving parents in Central Texas.  She’s married to her high school sweetheart and is the mother to three fantastic (no, that’s not a typo!) teenagers.
When she’s not writing, editing, or acting as a personal assistant to a NYT Bestselling author, Shauna enjoys reading, movies with Gerard Butler, vacays to the beach, and hangin’ with the kiddos–even if they don’t like hangin’ with her!
Shauna would love for you to visit her at her website and blog at: www.shaunaallen.com
Facebook : http://www.facebook.com/shauna.allen.12
Twitter : http://tiny.cc/s0dlmw
Pinterest : http://pinterest.com/shaunaallen7/
Posted by Megan R at 1:47 PM