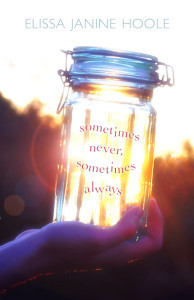 Cassandra fears rocking the family boat. Instead, she sinks it. Assigned by her English teacher to write a poem that reveals her true self, Cassandra Randall is stuck. Her family's religion is so overbearing, she can NEVER write about who she truly is. So Cass does what any self-respecting high school girl would do: she secretly begins writing a tarot-inspired advice blog. When Drew Godfrey, an awkward outcast with unwashed hair, writes to her, the situation spirals into what the school calls "a cyberbullying crisis" and what the church calls "sorcery." Cass wants to be the kind of person who sticks up for the persecuted, who protects the victims the way she tries to protect her brother from the homophobes in her church. But what if she's just another bully? What will it take for her to step up and tell the truth?

I am not a contemporary reader. I'm always happier when there are witches and/or wizards and/or werewolves and/or elves and/or dragons and/or whatever other magical creatures you can think. So it's not very often that I read a book that's set 100% in the real world.

Cass was a character I could definitely connect with. I think anyone who has ever disagreed with their parents' views (really, who hasn't?) could empathize with Cass's predicament. Cass is an atheist growing up in a deeply religious family. When a child becomes autonomous from their parents and begins to develop their own views on life, it can be a very interesting time and I enjoyed reading about this aspect of Cass's life, even though it was difficult for her. And as a note, religion obviously plays a bit of a role in this book, but it's not preachy at all because our narrator is a quietly rebelling atheist.

The other major theme here is bullying, both face-to-face and cyber-bullying. Bullying is an issue that is near and dear to me, so I'm always happy to see it addressed in YA books. And it was great to have aspects of cyber-bullying addressed as well. However, I was a little annoyed with how much Cass blamed herself for what happened, as their were other characters who played much bigger parts. That said, I probably would have felt the same was in Cass's position.

But don't worry, this book isn't all doom and gloom. There's a very sweet boy in the picture! Darin is pretty much everything I like in a YA love interest, so I was always smiling whenever he showed up! I also really liked that there were some significant sibling interactions, which I find are lacking in many YA books.

Sometimes Never, Sometimes Always is a interesting YA contemporary that touches on a variety of issues, including religious, finding yourself, sexuality, friendship and bullying. It was a contemporary win for this fantasy reader!