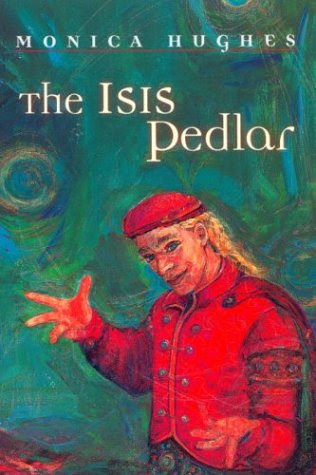 Michael Joseph Flynn has devious plans to cheat and corrupt the inhabitants of the planet Isis, and he appears to be on the verge of success. Few among the planet’s simple agricultural community can resist his magic firestone, his strangely delicious Ambrosia, and the Forever Machine. Only Flynn’s daughter, Moira, can unmask this smooth-talking pedlar. But can Moira avert disaster in time?

Overall, The Isis Pedlar is my least favourite of the Isis trilogy.I didn't feel the same connection to Moira that I did to Olwen in the first book, or Jody in the second. The dystopian aspects of Isis, which were very prominent in book 2 felt muted and less exciting now that so much time has passed.

So, I didn't have much of a connection with Moira and David felt one dimensional and boring, so that leaves us with our only really interesting character: Michael Joseph Flynn. But even then, I couldn't find any redeeming qualities to make me like him. And to be a fan of the rogue-ish spaceship captain not always working on the proper side of the law. But Mike was such a weak, despicable character, that I just felt pity for Moria for having such a shitty dad.

Oh, the instalove! I never noticed instalove when I read Monica Hughes when I was younger, but it is definitely some of the craziest instalove I've ever seen. Like they barely meet each other for one day, then David's ready to propose and I'm very lost. Did they even talk? But the book is so short at only 152 pages, that it's not enough space to put together a good love story, let alone have lots of adventure in the mix.

Finally, the ending just came together a little to neatly for my liking. Like BAM, everything is solved and nothing will ever go wrong again. When has that ever worked?

This review is coming off much more negative than I wanted it to, because, honestly, I enjoyed my re-read of the Isis trilogy, including The Isis Pedlar. It's a great cautionary tale about naivety and taking advantage of people. Overall, I recommend the Isis trilogy to young readers who want to get started read sci-fi.

I'm not a huge fan of this cover, but I like how it's continuous with the rest of the trilogy. And it's better than the old one!

Source: Received as a gift.

Find the Author (sadly deceased): Goodreads
Posted by Megan R at 4:00 AM